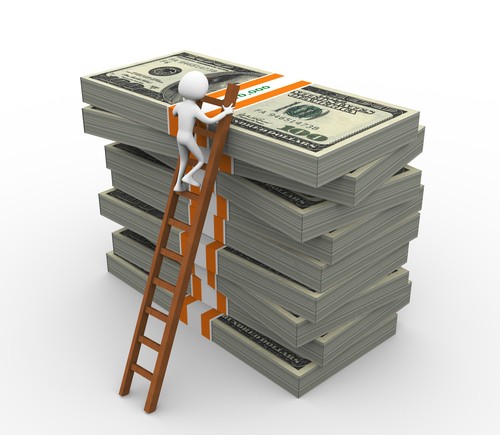 CD’s can be a great place to store extra money that needs to remain conservative.  Unfortunately the only way to get a good interest rate is to buy a CD with a maturity date that is quite a few years away.  This not only causes the problem of money being tied up and inaccessible, but if interest rates go up, the money is locked into the CD offering the lower rate.  Instead, of tying all money up in long term CD’s, the wise investor will build a CD ladder.

Because the interest rates offered on CD’s changes all the time, an investor will want to make sure there is always money available to capture the best rates on the market.  In times when the Fed is keeping interest rates low, the interest paid on CD’s will be low, especially for short term CD’s such as 1 or 2 years.  In order to get the better rates a CD with a term of 4 or 5 years will need to be purchased.  But in a few years, when the Fed bumps the prime rate up, a person will want new money to go into CD’s that are offering the better interest rates.  To do so takes just a little bit of planning.

First the investor should take the money to be invested and divide it into 4 to 5 equal parts; a large sum will obviously be divided into more parts than a smaller sum.

Each equal part will buy one CD of successively longer durations.  So the first part will buy a 1 year CD, the second part, a 2 year CD, and so on until there are 4 to 5 different CD’s being held, the shortest being 1 year, the longest being 50 years.

Each year, as the shortest term CD matures, the investor should buy another CD with a duration equal to the longest they originally purchased.

The science behind a CD ladder is that each year a portion of the money will be maturing.  If interest rates have gone up, a new long term CD can be purchased.  This will offer the maximum interest, and the higher interest rates can be captured every year.  The other benefit is that the money will still remain fairly liquid.  If a big expense turns up, a year can be skipped and the matured CD used to pay the expense.  If the money is not needed, the one year CD, plus the interest it earned, can be reinvested at the longer term.

There are a few ways to go about building a CD ladder.  You could search the local rates for CD’s at Primerates.com.  Another possibility is going to one bank and have them do everything.  Or you can hire a financial advisor to do the work.  They will find all the best rates, do all the work, and often reinvest the money for you each year.  This usually comes with a fee.  Setting one up is fairly simple; determining the best way to do it is a matter of how much effort you want to put into it.