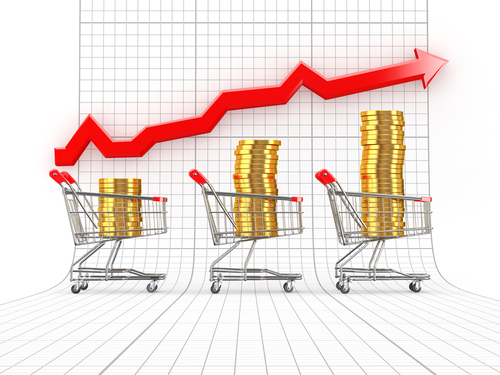 The Conference Board reports that the Consumer Confidence Index rose more than predicted, after declining in January. Confidence among American consumers climbed from a revised 58.4 the previous month to 69.6 in February. The size of the increase was unexpected after uncertainty of the resolution of the “fiscal cliff” issues and Americans getting hit with 2% hike in payroll taxes when the two-year reduction ended.

The 76 economists who participated in the Bloomberg survey estimated that the index would reach a median of 62. Individual predictions ranged from 58 to 66.5.

The index actual registered its first improvement in four months and made its biggest gain over the last 15 months. For comparison, this key measurement of the economy’s health averaged 53.7 during the recession.

However, the recovery of the housing market seems to have helped temper the effects of additional taxes coming out of consumers’ pockets. Rising home prices make people feel better about their financial future.

Along with higher home prices, consumers have a better feeling about the job market.  According to Ryan Sweet, the senior economist for Moody’s Analytics, “we’re creating enough jobs to at least keep the unemployment rate stable.”

Bloomberg’s computations show that Moody’s Analytics has been the most accurate firm at predicting consumer confidence levels over the last 24 months.

The index reveals that the negativity consumers had about income expectations improved a little compared to January. The report describes the current state of consumer confidence as “cautiously optimistic” for both businesses and employment.

“Income expectations, which had turned rather negative last month, have improved modestly,” said Lynn Franco, Director of Economic Indicators at The Conference Board.

One of the five questions the index measures concerns consumers’ current expectations for business conditions. Respondents’ optimism improved over January as reflected by the following numbers:

People also exhibited more hopefulness about the short-term outlook for business conditions. The number of people who anticipate an improvement in the business climate over the next six months increased from 14.4% to 16.7%. The percentage of individuals who expect business conditions to degenerate fell from 20.4% to 16.5%.

Americans’ feeling about the labor market improved in February. The number of individuals who expect companies to hire more workers climbed from 14.4% to 16.7%. Individuals anticipating fewer jobs fell from 26.7% to 21.5%.

More respondents expect their incomes to increase. The measurement rose from 13.5% to 15.7%. Persons foreseeing a decrease in their personal income dropped from 23.3% to 19.6%.

Consumer spending makes up 70% of all domestic expenditures. Retailers, manufacturers, investors, policymakers, and others rely on this critical indicator to monitor the nation’s economic growth.