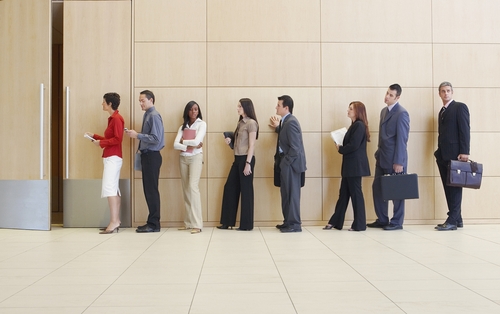 The week ending in April 28th saw a surprising drop in the number of initial jobless claims.  The Department of Labor reported a 27,000 claim drop from the prior week’s adjusted 392,000, down to 365,000.  This makes a fantastic leap forward in the labor market, even beating the analyst consensus of 378,000.  Looking back to last year, the initial number of jobless claims has dropped by 99,000.

While the drop during one week is great news, a look at the four week moving average still shows that the numbers are high.  The report shows this number of claims actually increased by 750 to 383,500.  Most economists and investors pay more attention to the four week moving average, rather than a single week’s report, due to less volatility and its ability to give a clearer picture as to what the job market actually looks like.

Insured unemployment dropped significantly for the week ending April 21st.  The decrease of 53,000 brought the number of insured unemployed job seekers to 3,276,000.  While this number may seem high, looking back to one year ago it was nearly 500,000 claimants larger.  The economy has made many great steps to getting people back to work, but there is still much more work to be done to be back to a sustainable and healthy level.

Geographically there were no distinct trends in the job growth.  Areas from across the country reported fewer layoffs.  Many states showed fewer layoffs in the construction industries, which is to be expected this time of year.  There was a trend, however, of states that reported increases of more than 1,000 claims.  Out of the five states that reported, four of them were in the northeast part of the country.  Much of them related to the educational industries.

The report shows great news for the end of April; however, these numbers still do no match up to the reports from March.  During March the economy saw the lowest number of jobless claims in the last four years.  Claims rose again in April, and appear to have started their decline.  Unfortunately the trend will not be known for several more weeks.  While overall the jobless claims are heading in the right direction (see chart), it is still a bumpy ride for many who are seeking employment.  Even the Fed Chairman Ben Bernanke said it is too soon to really analyze what the drop in initial jobless claims mean.  But in the overall trend of things, especially looking back at the numbers for this time last year, the labor market is moving in the right direction.