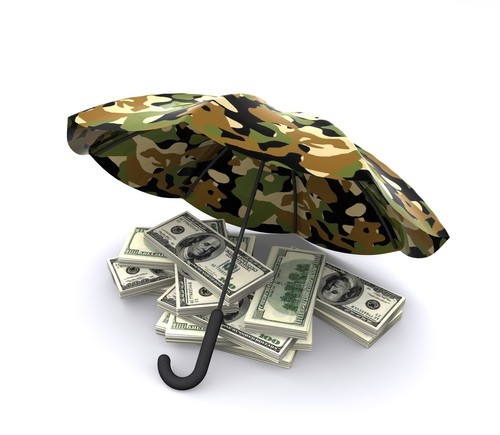 The men and women of the US armed forces who serve honorably face many financial challenges outside of their long hours and low pay.  One of the main financial traps is the lack of general education in financial matters.  Many armed forces personnel receive substantial sums of money as signing bonuses, but many may be ill-equipped to properly handle such a windfall.  General financial education regarding budgeting and sound investments is sorely lacking in secondary education, and many people do not realize how easy it is to spend a five-figure signing bonus.

Other financial traps come from the predatory lenders that may operate near military bases.  Such lenders – who may be payday loan agencies, small independent financial firms, or similar companies – may advertise special deals for fast, small loans to military personnel.  Most such loans can – and should – be avoided with sound household budgeting practices and a little patience, and military members may actually find better help in local banks and credit unions.

High-interest car loans are financial traps similar to predatory lending.  The first purchase many new military personnel seek to make is a vehicle, and they may not have good enough credit to afford one from a dealership.  Small used car dealers often charge high interest rates for their vehicles, rates that could be avoided with sound budgeting and a little patience.

Military personnel also need to be aware of housing scams.  Since military members have to move constantly, housing is typically an issue and scammers are known to copy rental advertisements, offer discounts to military members, and walk off with a security deposit wired from the service member.

When military personnel have low income and/or poor credit, financial schemes that promise to pay high sums with little time invested can be enticing to service members.  A general rule for anyone seeking to invest and run their own business – few, if any, business endeavors pay substantial income without substantial time invested.  Small part-time jobs with flexible time commitments from understanding employers are more ideal for military personnel needing extra money.

As an advocate for living with minimal debt and using financial common sense, it pains me to see scammers take advantage of our service members.  Military members and families need to be aware of the possible financial pitfalls that can be avoided with proper information and sound financial wisdom.