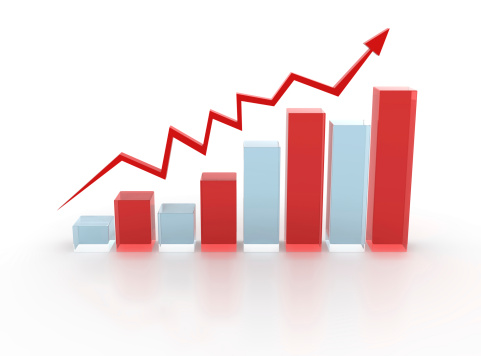 On February 29th the U.S. Department of Commerce’s Bureau of Economic Analysis released their report on the GDP for the fourth quarter of 2011.  The results are in line with what many of the other economic reports have been showing.  The economy is growing, but at a moderate pace.

The GDP increased at an annual rate of 3%, a rise up from 1.8% annual rate experienced in the third quarter, and beating the advanced estimate of 2.8%. This increase represents the fastest growth since the second quarter 2010.  It was led largely by a jump in private inventories which were down $2B in the third quarter, yet up $54B in the fourth.  Coupled with an increase of personal spending, especially on durable goods which was up 15.3% the overall economy grew at a faster rate than what was expected.  A year-over-year rate of 1.62% shows the economy is still growing at a moderate pace (chart here).

To investors good GDP growth is a strong indication that the stock market will continue to increase.  The more money that is flowing, and the larger the increase, means that companies are seeing great profits and increasing their inventories.  Increased inventories are indicative that these companies see the increased sales to continue.  While a strong GDP is great for those who are investing in the stock market, it can have negative effects on the bond market.  A fast growth can ultimately lead to inflation; inflation leads to lower bond prices.  This is why a good solid rate of 3% for the GDP is the best thing for a recovering economy.  Too much faster and the bond market will start to suffer, and too much slower will cause the stock market to suffer.

The BEA issues an advance release 4 weeks after the quarter end, followed by another release at 8 weeks, and the final release 12 weeks after the end of the quarter.  The GDP is often considered to be the broadest measure of economic activity, and is “an aggregate measure of total economic production for a country.”  Simply put, it is what the country is worth, and how fast the value of the country is increasing.  The report is looked upon with anticipation by investors.  By looking at four categories (personal consumer expenditure, investment expenditure, net exports, and government expenditure) the GDP paints a great picture of what is happening in the economy.  Then the data is presented on an annualized basis, so a 3% growth does not mean 3% in the fourth quarter, but rather .75% in the fourth quarter.  Since the quarterly numbers will fluctuate depending on seasons, the year-over-year percent will help to produce a less volatile outlook on the economy.