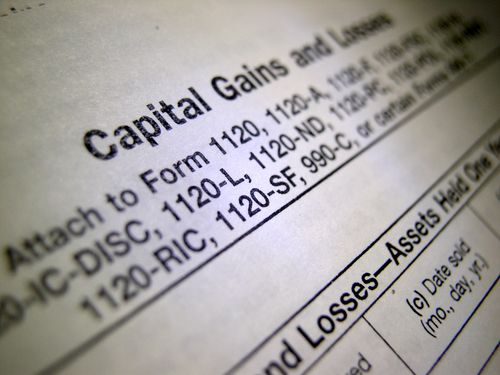 Capital gains are historically taxed lower than normal wages because of the fact that taxes have generally already been paid on the money. When a company makes a profit, it pays a tax on the money it earns. When it pays a dividend, the money that it pays out is then taxed again by the investors who receive the dividend. This is referred to as “double taxation.” Capital gains rates are also kept low in order to encourage investment. Recently, however, capital gains have seen some tax increases as part of the efforts by President Barack Obama and Democratic lawmakers to raise revenue for government spending and debt reduction.

The Tax Increases on Capital Gains and Dividends

The first increase in taxes on capital gains and dividends comes from President Obama’s signature healthcare legislation, commonly dubbed ObamaCare. Under the rules set forth in ObamaCare, individuals with an income above $200,000 and married couples with an income above $250,000 will be obligated to pay a 3.8 percent unearned income tax on dividends, interest, annuities, rents, royalties and gains on investments that exceed the income threshold.

The 3.8 percent tax applies to the lesser of either:

In the past, Medicare has always been considered a payroll tax and has been paid only on earned income (income from wages and salary). Medicare, in other words, was treated like Social Security which is also a payroll tax. The new 3.8 percent tax on net investment income is the first time this type of payroll tax has been applied to investment income. Medicare taxes were also raised on all income for individuals exceeding $200,000 and families exceeding $250,000. Their Medicare contributions went from 2.35 percent to 3.8 percent, which is a .9 percent payroll tax hike.

This increase on investment income on families that President Obama has defined as wealthy is NOT the only tax hike that “wealthy” families will face on their investments either. As part of the January 1st agreement to avert the Fiscal Cliff, the capital gains rate was raised from 15 percent to 20 percent for singles with an income above $400,000 or for couples with an income above $450,000.   Those within this income group also saw their tax rates raised, resulting in a tax liability that AP reports is reaching the highest level in 30 years.