Tesla Motors – Invest? Buy One? Or Will It Flop? 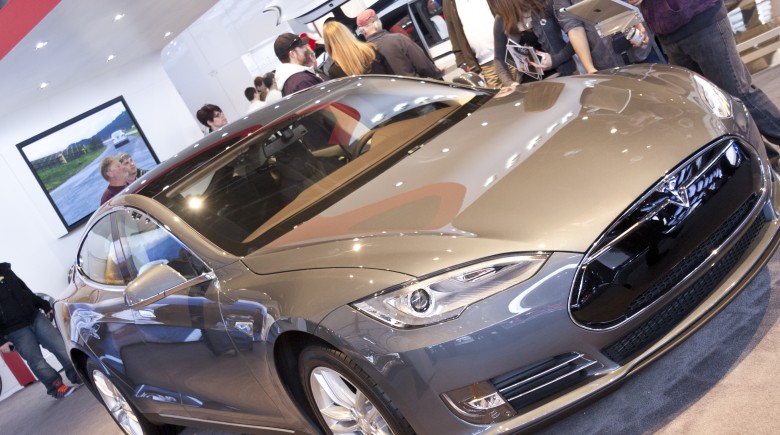 Tesla Motors is the automobile world equivalent of Google.  It is to GM as Google is to Yahoo: the younger, hipper equivalent in an industry that was once dominated by an old established player.  As much as this comparison makes sense, Tesla has not yet made it through to becoming a global titan like Google.  Instead, it could eventually fall to the wayside like the discarded car brands that GM has shed over the past few decades.

With Tesla Motors entering the Nasdaq 100, it has started it climb towards becoming a household name and appearing on driveways across America.  However, this could simply be a false start and Tesla could simply become the next technology company to flop in as recent years.  There are simply no guarantees and for all its promises, there are still significant hurdles that have to be over come.

Since being founded in 2003, Tesla has grown slowly since revealing the Tesla Roadster in 2006 with the first vehicles to come off the line in 2008.  Since then, the one car line up has expanded to include the Model S and the upcoming Model X.  However, the original Roadster finished production in 2012 to make way for the newest vehicle in Tesla’s line up.  However, with the prices for the Model S, Roadster, and upcoming Model X ranging in the $70,000 to $100,000 range (excluding subsidies for electric vehicles), it is well out of the reach of the vast majority of American Car buyers.  Furthermore, all of Tesla’s vehicles are electric, which have their own problems with range anxiety that doesn’t come with gas-powered cars.

Furthermore, the electric vehicle market has grown since Tesla Motors introduced the Tesla Roadster with many major automobile manufacturers introducing their own electric cars.  Chevy has the Volt, Nissan has the Leaf, Toyota has the Prius Plug-in (though it is more a hybrid than a true EV), and BMW is supposed to be bring over their i3 electric vehicle later this year.  With this range of competitors – from the mainstream-priced Leaf to the i3 – there is a possibility that the EV market could be taken over by the big auto manufacturers.

So, to recap, Tesla Motors is a small automobile company that has never produced more than one model at a time, operates in a niche market, targets a small segment of the American population, and faces competition from very established players in the American automobile market.  As a whole, this draws questions as to why Tesla Motors would survive or even flourish.  It is even finding it difficult to sell cars in some states.  So, should you invest in Tesla?  Should you consider buying a Model S?  Or will Tesla Motors flop and become another would be technology giant to fail before making it big?

However, the news isn’t all negative.  Tesla’s Model S already has gotten tremendous reviews, including a 99 out of 100 from Consumer Reports.  It is building a supercharger network to reduce range anxiety.  Furthermore, Tesla has sold the most electric vehicles in the US and has turned a profit for the first time.  Finally, Tesla Motors has been the first auto manufacturer to completely repay the government loans for electric vehicles.  Here’s a great Forbes article that details why Tesla has been beating the giants of auto manufacturing.

With this all said, is Tesla worth investing in?  The short answer is Yes, but probably not right now.  Within the last three months, Tesla Motor’s stock has tripled from around $40 a stock in April to over $120 now.  This type of increase is based more on expectations rather than a realistic aprasial.  Tesla is unlikely to see the exponetial growth needed to justify its current market price, but its future is undeniably bright.  So, instead of investing, you should probably head over to your local Tesla showroom today to check out the vehicle of the future today.

Tesla Motors – Invest? Buy One? Or Will It Flop?