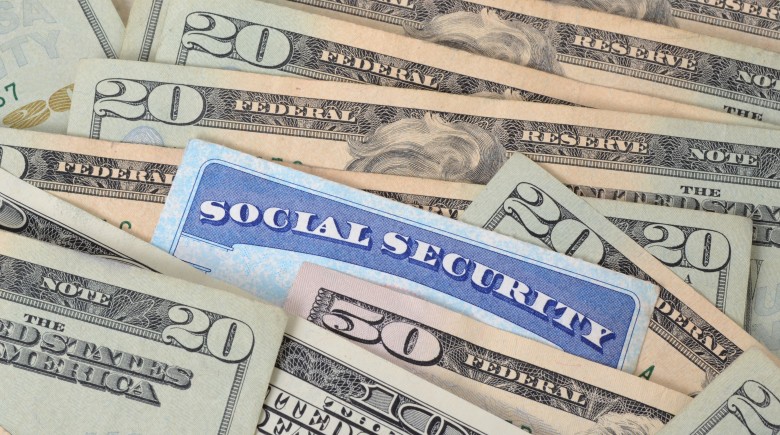 This theory, if you will, has been rattling around in the “financial planner” world for a long time. And the truth of the matter is that it makes a lot of sense, After all, just like a bond would Social Security generates a fixed dollar amount of income every month. This income is essential to most retirees and it would certainly be foolish not to consider that money as part of any overall retirement plan. To compare it directly to bonds many planners will use a formula to project the amount needed to throw off the equivalent income. Without even using any time value of money calculations one can easily figure out how much money it would take in today’s (or an average time period) interest rate environment to realize your monthly benefit:

“We go through a process where we value someone’s Social Security like a TIP,” or Treasury Inflation Protected security, said Bill Meyer, chief executive of Social Security Solutions, which offers fee-based claiming tools and services. “Then we add it into the household’s allocation.”

As a quick note; TIPs are commonly used as equivalents due to the fact that Social Security has benefits that can increase over time due to inflation. At the end, many people would have the benefits that would equal hundreds of thousands of dollars in bonds. As an example $300,000 in bonds at 4% (generous in today’s market) would generate $12,000 per year in interest or $1,000 a month. To keep the theory going, many planners will consider that fictional $300,000 as an asset in your bond allocation:

I think you see where this is headed. To follow this plan, most people would find themselves well short of the proper allocation of stocks and vastly over weighted in bonds. Intellectually speaking this is difficult to argue with, except to possibly say that the allocation formula itself is skewed.  But the reality is that most people don’t want to consider Social Security a bond equivalent and certainly don’t want to pretend that they have 3 or 4 hundred thousand dollars that they don’t, in reality, have.

It’s just human nature and it would be difficult to fight even if it was the “right” thing to do. Sure, Social Security acts like a bond as does any pension like vehicle, but that doesn’t mean that people want to take their actual savings and invest 70% of it into the stock market. To use the example highlighted above, the investor would be taking $500,000 of his total savings and putting it into the stock market. That would leave him with only $200,000 in “safe” money such as bonds and cash. That may be the correct thing for this investor (I’m skeptical of even this and would need to know a lot more about this retiree), but it is also asking him to really stretch his neck out. After a lifetime of work and savings this “plan” would require him to risk a very large chunk of his money to the whims of Wall Street. One doesn’t have to delve very deeply into the memory bank to recall mutual funds diving 40%, 50%, or more during times of panic. In 2000 some internet funds (and “tech” funds that essentially were internet funds) plunged 90%!

Does the average retiree really want to risk losing, say $300 000 dollars no matter how temporary it may turn out to be? I think not, and there is no amount of intellectual reasoning that posits he really has $300,000 in Social Security benefits, that is going to change his mind. This is another Wall Street theory that may sound good on paper, but will have a difficult time proving itself in the real world. So, whether you agree that Social Security should be considered as an asset in this sense or not it is important to remember that the retiree, in many cases at least, most decidedly does not.

Are Social Security Benefits Part Of Your Bond...