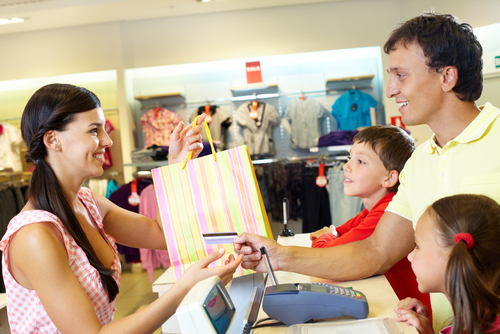 Like other Wall Street analysts, the 81 economists participating in the Bloomberg survey did not expect the boost. Instead, they predicted a median drop of 0.3 percent with estimates ranging from -0.9 percent to +0.7 percent.

Sales fell off in March because of the bitter weather experienced across the country, which kept consumers at home. Escalating home prices, positive news in the employment picture and the historic performance of the stock market help pave the way. Consumers spending for cars, building supplies and gardening goods provided a light boost for this closely watched metric, which climbed 3.6 percent on a year-over-year basis.

Economists, investors, businesses and policy makers see consumer spending as a significant measure of the health of the domestic economy because  households make up the majority of  U.S. economic activity.

The release shows that nine of the 13 major categories measured by the report were positive April. The largest gains were realized in the following sectors:

Auto sales  reached an annual sales pace of 15.2 million units in March, but was down  to 14.9 million -units in April The 15.3 million units  rate in the first quarter of 2013 represents the best sales total since the same period in 2008. This portends well in terms of a positive outlook for the coming months.

Good start for next stretch

Some analysts expect the retail sales news to offset earlier predictions that the economy would grow at a slower rate because of the payroll tax increase, from 4.2 percent to 6.2 percent, that took place at the beginning of the year. In addition to improvements in the labor market and rising equities and home values, lower costs at the gas pump help fuels consumer’s purchasing power.

TJX Companies senior vice-president of global communications Sherry Lang stated in a sales call the month (May) is “off to a strong start.” “It was nice to see strength in apparel as well as home categories across the board.”

Consumer spending continues to support a weak economy, which is expected to grow at a 1.8 percent annualized rate in the second quarter.  In the first quarter of 2013, the economy grew at a 3.2 percent rate, which is the biggest since the fourth quarter of 2010.

Chief economist Michael Moran of Daiwa Capital Markets America Inc, agrees with the view that consumers “are staying active,” and keeping the economy afloat. According to Moran, “We will see a slowdown this quarter, but it won’t be dramatic. There will be some damping of spending due to the payroll tax, but it will be mild.”