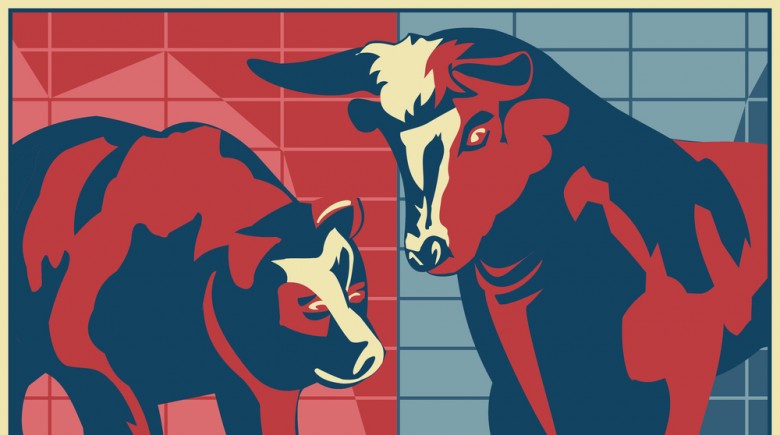 Syria will hang over the markets this week, of course. Whether the war measure passes or fails is still up in the air, but it may be bad news whichever way it goes at this point. Obama may rally the public and, more importantly, his Democrats in the House to his side this week and get enough votes to squeak by. But, the whole exercise seems to be a mess at this moment. Democrats may rally, but they already seem resentful being put in this position, if the weekend talk shows are any indication. And a no vote doesn’t seem to be all that palatable either for the markets or the country as it will further expose Obama’s fecklessness. Yes, the markets are nervous about any war, but they may not like a commander in chief getting publicly repudiated either. The whole thing is such a problem that there hardly seems to be a satisfactory outcome.

The ubiquitous Cramer seems to feel a bit nervous about this (and other things) also, and is  recommending a sell:

Therefore, “I’m sticking by my overall game plan to sell stocks into any big strength, so that you can buy them back later on huge weakness caused by these two prevailing issues,” he said.

Of course, being Cramer, he then promptly goes on to say what you should buy this week, so…business as usual. But with Syria dominating this week, I wouldn’t be surprised if many people join Cramer on the sell side bandwagon. Needless to say, most of the market talk

intensity will originate out of Washington this week.

Another Washington matter, the Fed, will be wondered about as well, as every possible data point will be utilized as a tea leaf. That miserable jobs report on Friday, has left many speculating that the Fed may hold off on “tapering” this September. Not everyone thinks they will wait however:

Kim Forrest, a portfolio manager and senior equity analyst at Fort Pitt Capital Group, had a different take. She said the market still thinks a reduction will happen this fall, either in September or October, and that’s why stocks moved more on Syria news in Friday’s session than in reaction to the jobs report.

As this “tapering” business has been talked about incessantly for months now, it’s highly unlikely to taper off anytime soon (taper off!–get it?–I know, funny stuff!). Nothing on the announcement docket this week appears likely to settle the argument, so expect more chatter.

On a bit of an upbeat note, or at least mildly distracting, the tech geeks will have some fun with the new iPhone unveiling.  Or at least that is the speculation for a scheduled Tuesday meeting. Nothing gets CNBC in a tizzy more than Apple, so expect wall to wall coverage of that event. McDonalds is also expected to report this week and there will be some other data as well. But, this week is Syria and while Apple and the Fed will provide some side stories, markets will care most about another war in the Middle East.